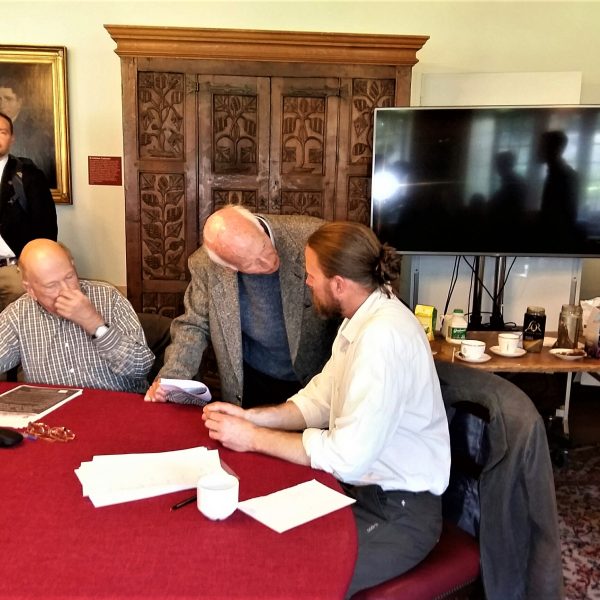 Dan Drage was born in Colorado, USA and has lived abroad since 2006, including ten years in Vietnam.  He is based in St Andrews, where he spent the last academic year as the first artist-in-residence for the Institute for Theology, Imagination and the Arts (ITIA) at St Mary’s, University of St Andrews.

“A stroll along a nearby stretch of the Fife Coastal Path initially inspired this Juniper Berries series.  Usually drawn to forms, this day I was filled with a desire to capture certain colours, especially the vibrant yellow gorse.  This study of colours, of gently separating out one particular characteristic, I came to see as a process akin to distillation.  The idea of ‘distilling’ colours naturally led me to consider various botanicals used in gin, chief among them being—of course—the juniper berry.

Further study into Juniperus Communis revealed the average gestation period for a berry to be three years, with a single juniper bush containing berries of various ages.  The kind and knowledgeable staff at St Andrew’s Botanic Gardens provided me with samples after observing my intense and drawn-out fascination with this particular bush.  Back in my studio I closely observed the variations, mixing colours to match.  Of course with a waning glass of gin nearby I could smell (and taste) the berries as I mixed (the watercolours here are, in fact, mixed with a little gin).

The Juniper Berries series represents a new strand in my ongoing conversation with the given materials at hand.  Earlier watercolours have been highly realistic representational works, while my 3D assemblage pieces, though abstract, have focused on form and shadow.  I see the current series relating more to sculpture than painting: the layering of one material (pastel or paint) onto another (paper).  However, removing nearly all connection with form, I have endeavoured to highlight colour.   As with previous works, pattern continues to assert its power in my aesthetic decisions, but it is colour that carries these pieces.

That something as simple as a common juniper berry could shine forth such complexity of colour—or indeed of taste—reminds us that the stuff of life is more than it appears, is in a way sacramental, calling us beyond what we think we know. ”  – Dan Drage