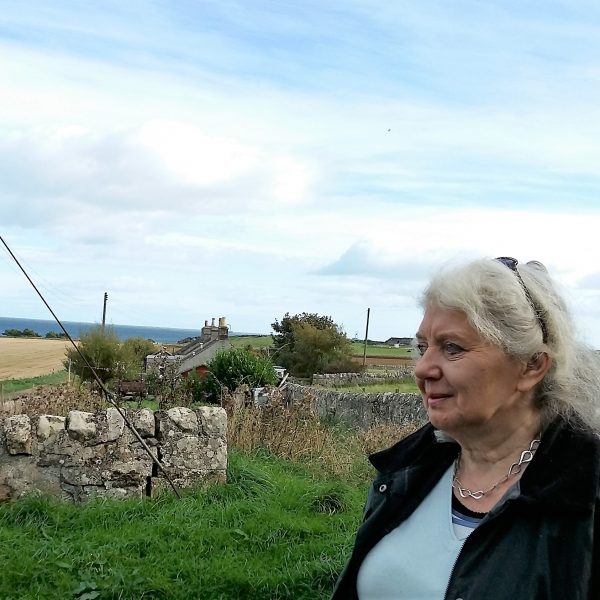 ‘I was born and grew up in Balmerino in the Kingdom of Fife, spending my early childhood in St Andrews, where I used to spend days playing on the West Sands.This upbringing has undoubtedly been a major influence on my work. The big skies and the crisp North Sea light of Fife have followed me throughout my career, as well as forming the basis of many a comment while I was a student at art school….

I studied as a postgraduate at the Royal Academy Schools in London. I later had a Picker travelling scholarship to Norway, which enabled me to go beyond the Arctic Circle and see and draw the spectacular scenery. It was later, when I spent a summer drawing in South Uist, that led me to become primarily a painter of landscapes.

After exhibiting in several London Galleries with artists such as Victor Pasmore, Norman Ackroyd and Bert Irvin I moved to the Cotswolds, where I found more big skies, as well as a studio in an old sheep milking shed. It was also in this period that I sold extensively in Europe and the Far East, and had a solo show in the Soho Galleries in Sydney, Australia.

And then I returned to my roots. I moved back up to Fife a few years ago and now live in Crail, in the East Neuk. Another lovely studio in an old cow shed overlooking the sea, where I am surrounded by the light on three sides and cannot but be aware of the huge skies and the large landscapes. The cow shed provides enough space that I can produce large (150 cms x 150 cms) paintings  as well as a range of smaller ones.

Early on I became the Artist in Residence at the Fairmont Resort Hotel in St Andrews. More spectacular scenery, overlooking St Andrews Bay, though this time surrounded by happy golfers. A very enjoyable year ended in a show in the vast atrium of the hotel.

I feel that drawing is an extremely important (and these days undervalued) discipline, and I try to draw  and paint outside for at least some time each day. I believe that this constant observation of light, distance and perception of space feeds through to my paintings, enabling me a denial of self and just recording the outside reality. I was fortunate enough to be taught drawing at the Royal Academy Schools by Norman Blamey and Leonard McComb, and some of their comments remain with me as I work today.

As well as my painting I ‘m also a keen printmaker. I am currently a member of the Glasgow Print Studio where I had a show in early  2018 and where I make prints and etchings using a combination of different processes.’

You can see a video of Belinda speaking about her work from her Fife, Scotland, studio here – simply click on this link.

It’s a great pleasure to be working with Belinda Bullen again for our Peerie exhibition of small works.  Gallery visitors were appreciative indeed of her large scale works in ‘In the Long Evenings: Colour and Light,’ which seemed to illuminate the gallery.  Her small scale works are eagerly anticipated.